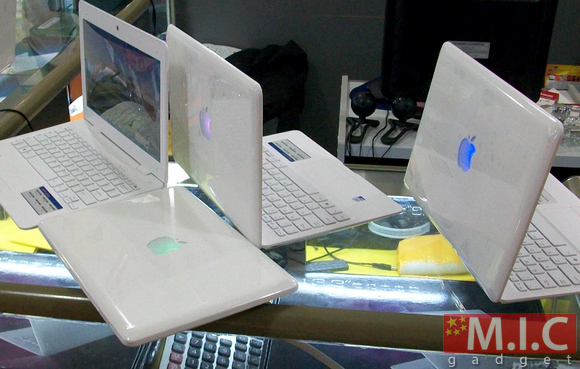 The ultimate MacBook Air knockoff has landed, and folks all over are excited about it. This is the best MacBook Air wannabe ever, featuring a real glowing Apple logo and it’s almost as thin as the real one. Here we have a wholesome unboxing and hands-on shots for you to enjoy. And a video!


Our previous introduction on the MacBook Air Knockoff with Glowing Apple Logo has brought us a motivation to buy it and own it. We love the knockoff, it’s possibly the most beautiful product the Chinese knock-off makers have ever copied. There have been some MacBook Air knockoff reviews out there, but we got the first of the units that will actually ship to customers, so it’s time for telling you what we think.


We need to remind you that this knockoff doesn’t come with the specs you see on the real MacBook Air. It’s powered by a 1.66GHz Intel Atom N450, 1GB of RAM, a 160GB hard drive and a 4-cell battery. Yup, it comes with the new Intel Atom platform you see in the new netbooks out there. Also, you get the support of 802.11b/g/n Wi-Fi for this machine. We are really satisfied with its price tag, which cost only $1900RMB (about $280). Much more affordable than Apple’s MacBook Air.


I have to admit that the knockoff makers had put a great effort on this Air wannabe. The packaging is almost the same as Apple’s MacBook, you can just show off the package box to your friends without a second thought.

Isn’t it amazing? The packaging has something different. If you look carefully on the MacBook Air picture on the box, the original “MacBook Air” logo has changed to “XXXXXX”. This is funny.

In the box, there are not much things to take care of. It’s rather simple to sort out the machine, adapter, battery, driver disc and instruction manual.

We are amazed with the inside-packaging as well. You get a MacBook Air driver disc and a Chinese version of Apple’s instruction manual. They are quite real.

By looking at the package box, I almost thought that I have purchased Apple’s MacBook.


The moment you hold the Air wannabe, it looks and feels just like the real one, but it’s not built from one solid piece of aluminum. It has a plastic unibody which may not be durable.

The glowing Apple logo is beautiful. It’s not exactly perfect as it doesn’t feel as good as the one you see on the real MacBooks. The surface’s texture is a little bit rough.

And the glossy 13.3-inch (1280×800) LED-backlit display is just the right size for bloggers. Its picture is quite pretty though and you’ll notice sharpness is as good as the MacBook Air’s.

The keyboard is full size. Typing on the Air wannabe is a pleasure, not a chore, as I did this review by using the keyboard. You get a Windows logo instead of an Apple logo for the key beside the spacebar. Also, the trackpad is spacious to have your fingers put on it, but it doesn’t support the multitouch. Only basic scrolling can be done on this large trackpad.

The power button lights up when you press it. It acts in the same way as the real MacBook Air. You can see a row of indicator lights on top of the keyboard too.

The Air wannabe has an extremely sturdy-feeling foldable door that is impossible to open while resting on the table, and basically requires picking the entire machine up. This exposes the Air wannabe’s three ports on the left-hand side: one USB 2.0, one mini-HDMI, and one headphone. Also, there’s a Ethernet port too. On the other side, you get a SD-card slot, one more USB port and a power connector port.

We are surprised to see a infra-red detector beside the webcam. You can use the included remote to point on it for video playback. Not sure anyone would do this.

The lack of a user replaceable battery in the MacBook Air has brought inconvenience for some users. Luckily, you get to remove your battery on the base of this Air wannabe.

So is this Air wannabe thin? Yes. Light? Yes.

However, it’s not quiet. The fan runs almost nonstop during basic operation. Luckily, it’s not so noisy, definitely acceptable for anyone.

The machine is exactly the same size as Apple’s Macbook Air. We wish it can be smaller for portability. We put the HP mini 2140 side-by-side with the Air wannabe to give you a clearer look on how big is it.

Personally, I love the size of netbooks. 13 inch may be too big but with an ultrathin body, it’s acceptable. Surfing the web will definitely feel more comfortable on the 13 inch screen size.


We were told that the Air wannabe has a “2+ hour battery life,” achieved through a 4-Cell removable lithium polymer battery. I tested the system with power saving (lower performance), medium screen brightness and wi-fi on. And I was able to play back a high-def MOV for over an hour (about 80 minutes). We wished it could last longer.

On PCMark05, which measures overall system performance, the knockoff scored 1,620 compared to the Apple Air’s 3,684. Forgot to tell you that the Apple MacBook Air we have features a 128GB SSD.

Next, we carried out the 3DMark testing. (Note, the knock-off has an Intel GPU, the MacBook Air has the Nvidia GPU

On 3DMark06, which measures graphics performance alone, the Apple’s Air notched 1,385 to the knock-off’s 163.

WINNER: The Apple’s MacBook Air. Clearly, these two systems are not in the same class when comes to processing power and graphics. However, the knock-off was more than adequate for common tasks like surfing the Web, sending e-mail, writing documents in Word, or watching 720p video.


We think this Air wannabe is almost perfect to be an ultraportable. A model with Atom N280 is still available for purchasing (very few stock) and it sells with the same price as this one, $1900 RMB (about $280). You can upgrade to 2GB RAM with an additional cost. Customers can choose between 2 color options, black or white. The Apple logo glows in white color when the machine is powered on. Beautiful enough to bring it to Starbucks for a show-off.

More Unboxing Shots and Hands-on Shots on Our Flickr

UPDATE 3: Check out the performance of this MacBook Air knockoff!