Awesome! We’ve been waiting this for so long! Previously, we reported that Apple will open two retail stores in Hong Kong, and guess what, one of them is getting ready to open this Fall, probably the first week of September! Where is it? The new 15,000 square-foot store is located at the International Finance Center (IFC) Mall in the Central district of Hong Kong Island. How great is it? It is a flagship store with 300+ employees! And Apple spent over 20 million USD to make this store!

Our inside source has confirmed the first Hong Kong Apple store will be opening in early September, right after the opening of China’s biggest Apple store on Shanghai’s famous Nanjing Road in late August. A recruitment drive is underway but the store seems to be having problems recruiting people. There is not enough qualified people, and in Hong Kong, all the qualified ones are either rich or getting paid more elsewhere. Moreover, we are hearing that Apple store employees will be brought from all over the world to open the store. Sounds awesome.

Where is the Apple store located?

Here’s a small introduction on the location of the store, the IFC Mall. It is a 4.7 million square-foot complex, and contains 200 stores, comprising a unique combination of high-end shopping and entertainment outlets, prestigious offices and Hong Kong’s finest hotel and suite hotel – Four Seasons Hotel and Four Seasons Place . Premier brands, flagship stores, and unique concept stores can all be found in the IFC Mall. Knowing that Apple will be opening their first Hong Kong store in the IFC Mall, we head off to the location to see what’s going on now. We took some pictures, and you can see them below. 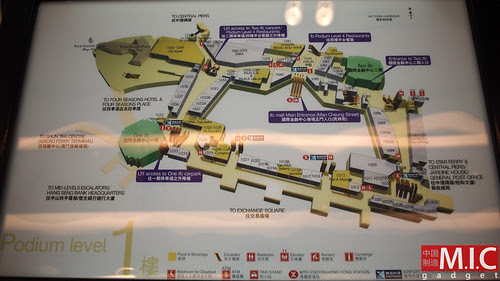 First, let’s look at the floor plan of the IFC mall. 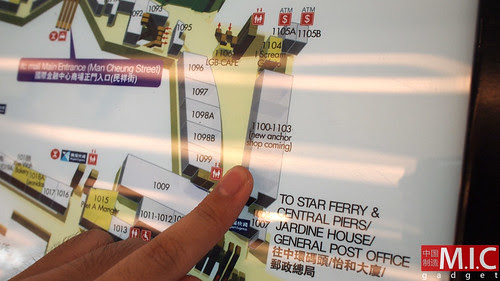 And we see a new anchor shop is coming… 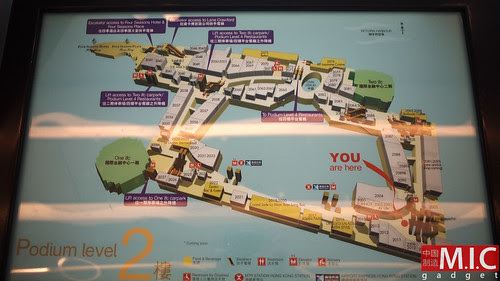 How about the second floor? 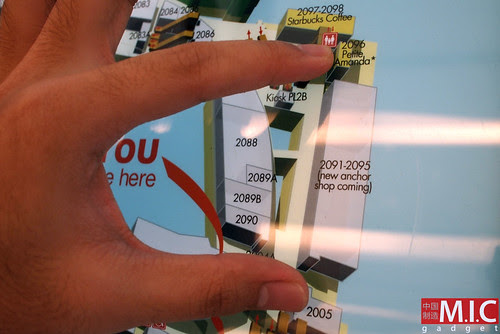 Wow, it’s there too! Let’s check it out! 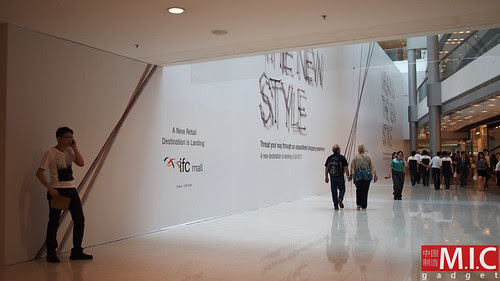 We are on the first floor, and that’s all we can see… 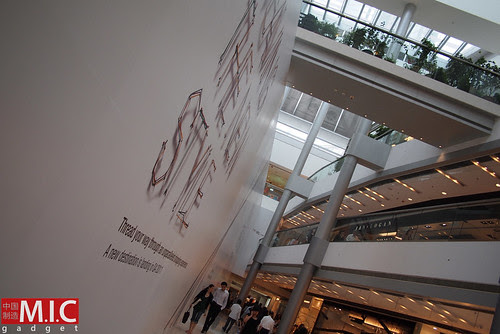 Looking down from the third floor…

And looking down from the second floor… 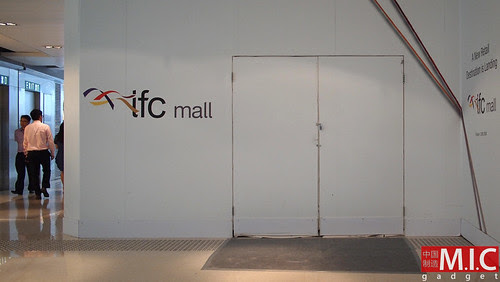 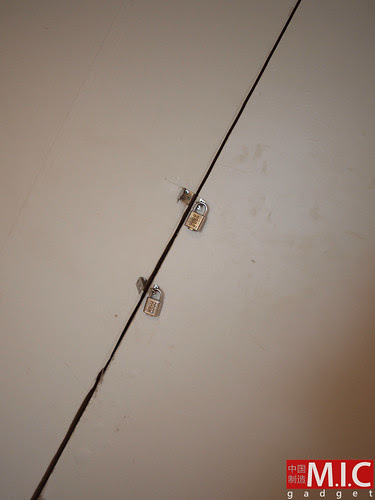 It’s locked, and we can’t see anything inside. 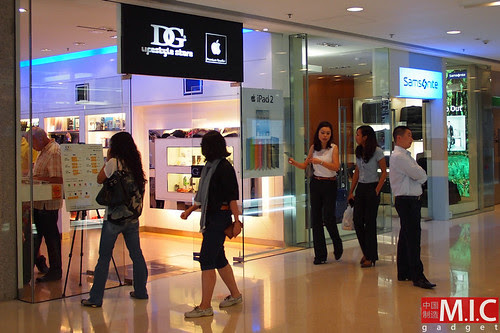 There’s a reseller store near the place. 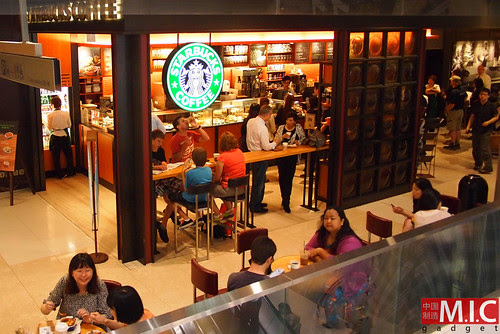 This first Hong Kong Apple store is being compared to other high profile stores in Paris, London, and New York’s Fifth Avenue. It is pretty amazing to see that the store has 15,000 sq ft of space, and covering two levels of the IFC mall. The store aims to accept 40,000-plus visitors a day, four times the average of US stores. Everything looks good, but you need to know that Apple spent lots of efforts to make this store.

The rent and the target market

We all know Hong Kong’s soaring rents make companies face difficulties to open retail stores in the city. There are just so many highly paid bankers here to push up the rents in a lot of desirable areas, including Central. Retail rents in Hong Kong jumped 46 per cent quarter on quarter, making it the second-most expensive location in the world as major brands vied for limited shopping space. The brands aim to open stores in prime districts, and Central is a good location to market the brands to mainlanders visiting the city. If you are a foreigner, you may not know that the mainland visitors play an important role in the retail sales in Hong Kong. Since Hong Kong is well-known as the Asian shopping paradise providing an array of luxurious shops and malls, the city turns out to be one of the leading travel destinations in Asia for mainland tourists. Up to 80 percent of mainland tourists come all the way from their hometowns to Hong Kong to purchase quality products, and these mainlanders always plan to spend HK$12,000 (about $1540) on average during their stay in Hong Kong, with more than half of the money allocated on shopping for luxury clothing and electronic products. They usually visit Hong Kong during China’s National Day (often called as Golden Week) and Christmas. So, in order to attract mainland tourists from the Guangdong province, Apple decided to open their first Hong Kong store in Central, and the company has negotiated a 10-year lease for the retail space, spending $20 million-plus for construction and up to $9.4 million a year for rent. Since Apple negotiated a 10-year lease, the landlord could only try to raise the rent in 2021. Just in case you want to know more about the landlord, IFC Mall was jointly built by Sun Hung Kai Properties, Hong Kong’s largest developer by market value, and Henderson Land Development.

Why people from mainland China will visit the store?

Next, this new Apple Store should attract a tremendous amount of visitors, especially the mainlanders from Guangdong province. Guangdong province includes five major cities — Guangzhou, Shenzhen, Dongguan, Chaozhou and Shantou. First, you must know that it is not convenient for the citizens from Guangdong province to travel to Beijing and Shanghai, airplanes are absolutely needed for the travel. If you were in a car and maintained an average speed of 60mph (96 kmh) over the course of your journey, it would take you around 20 hours to get from Guangdong to Beijing, and 13 hours to Shanghai. If the Guangdong citizens visit Hong Kong, it will only take them 2 hours for the journey by bus. Secondly, it is cheaper to buy Apple products in Hong Kong, concerning the exchange rate. As the Renminbi gradually rises in value against the US dollar, the Hong Kong dollar, which is pegged to its American namesake, will inevitably decrease in value against the Yuan, enabling Chinese mainland people to buy more goods in Hong Kong for the same amount of money. Apple’s MacBook Air starts from HK$ 7,588 in Hong Kong, however, the product costs more in China where it starts from RMB 7,998. So, we can tell you that the Hong Kong Apple store will be a paradise for Guangdong Apple fans.

You may ask, how about the Hong Kong consumers? Well, they will love this store, and we are pretty sure about that. One of our editors, Chris, has been living in Hong Kong for five years and he thinks the iPhone is even more popular here then in America. Every month he sees more and more Apple MacBooks, iPads and iPhones in Starbucks and Pacific Coffee. For foreign tourists in Hong Kong, they will be the most fortunate ones, since there is no sales tax in Hong Kong for electronics.

What Apple is planning?

We all know Apple wants customers to be happy, and for Hong Kong, it’s totally a special case. There is a grey market in Hong Kong, and the vendors are always selling the Apple iPhones and iPads for a higher price when Apple’s authorized resellers have no iPhones and iPads in stock. Some local customers will spend more money to purchase the iPhones and iPads from the grey market if both the authorized reseller and Apple’s Hong Kong online store have no stock. If there’s an official Apple store available in the city, local customers can visit the store to purchase the Apple products, with no mark-ups at all. So, Apple could prevent the grey market to earn more profits than them. Oh, if a store employee is caught scalping, it is instant termination.

Other than this store in IFC Mall, Apple is also preparing their second store in Hong Kong. The second store has 20,000 sq ft of space, and it is expected to open in 2012. Location is at Hysan Place in Causeway Bay, we will get more details about that in coming months. In the meantime, we will visit the IFC mall every week, to check if there’s any updates on the construction! (^O^)