It’s official. Apple has just announced the very first Hong Kong Apple store will be opening on this coming Saturday (September 24th). There will be a grand opening ceremony at 9am morning, and all preparation are ready. We will have more pictures and coverage in this post. Stay tuned for more updates!

FINAL UPDATE: We are LIVE at HK Apple store, about 8 hours remaining before the opening. At the moment, there are about 100 customer queue up for the new store, and more fans and crowd are rolling in. Apple has increased the special souvenir t-shirt to 5,000 set, a free gift for those first day customer. CEO Tim Cook will properly not be present at the opening ceremony. Some Apple employees and management staff were still busy doing their preparation. Local press and TV crew were doing their spot coverage. We found that everyone were so excited about the first Hong Kong Apple store, lots of HK people treat it as a ‘pilgrimage’ tour! We have the final update for this post, thanks everyone for joining us. You can proceed to our live blogging post on HK Apple store opening for more coverage! 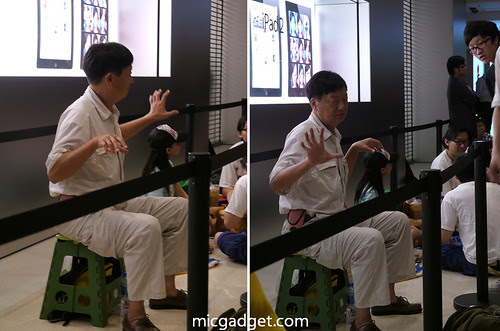 One of the die hard Apple fans is middle-aged, doing Chinese Tai Ji Quan (Chinese martial art) to get rid of his tiredness. 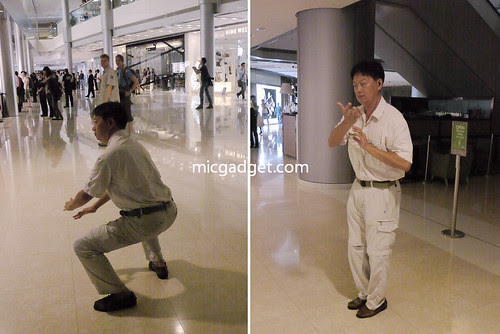 He is very good at it. 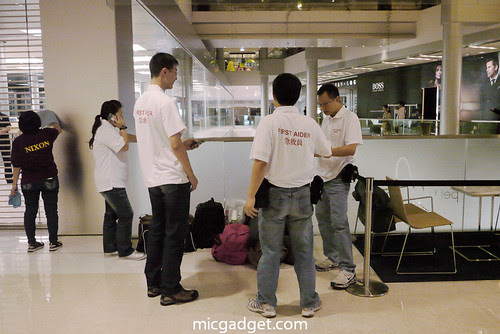 The first aid team is there, just in case someone feels sick. 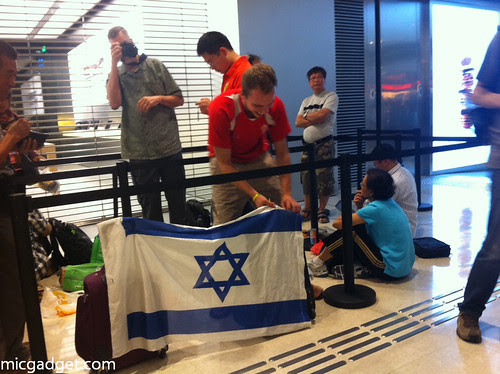 This guy wants to represent his country. 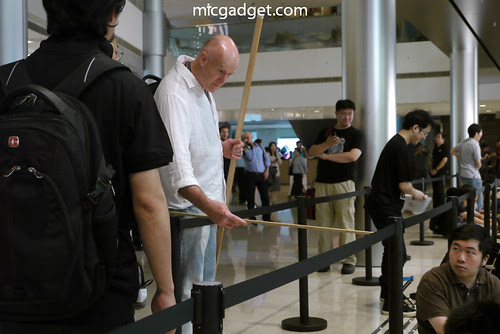 The waiting lane is specially adjusted to 1-meter wide to ensure the Apple fans in the queue to be comfortable. 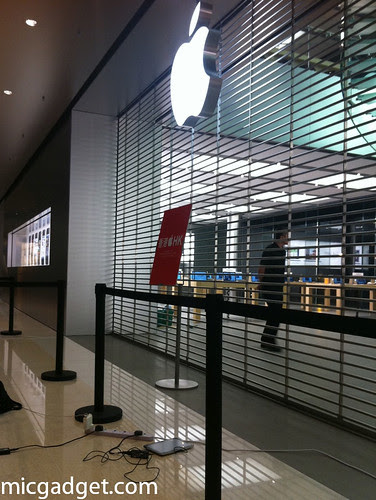 The store provides power strip too. 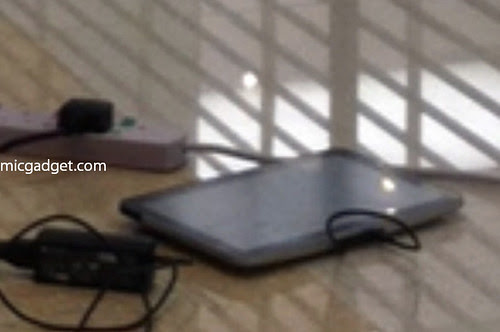 Someone put his Honeycomb tablet there to charge it. Awesome. 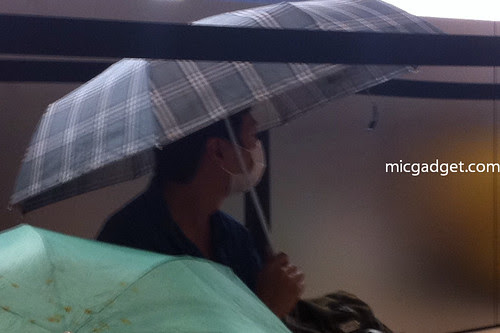 This guy is the first in line. According to the local media, he seems to be a scalper.

UPDATE 5: Rumors say that CEO Tim Cook will be coming for the opening ceremony on this Saturday. Today, Apple has invited the local press, employees’ family, authorized reseller and some VIP guest to visit the new store before the official opening. The Apple fans will start to queue up tonight, 36 hours before the grand opening. They are going for the special opening gift for the early customers. We are told by the Apple employee, there will be 3000 T-shirts to give away. At the moment, the Hong Kong people are getting very, very and very excited about the new Apple store in town! 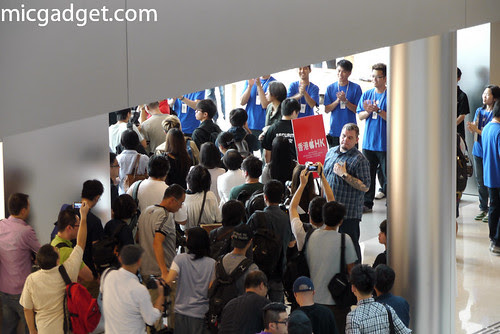 The local press and media are invited to enter the store for the first look. 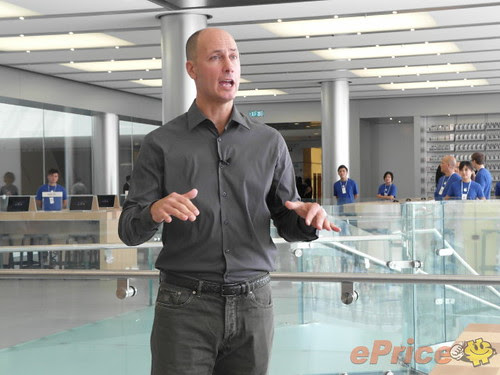 Bob Bridger, the Vice President of Retail Development gave a speech in the store. 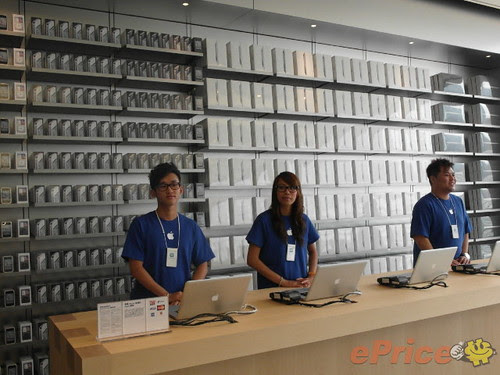 The Express Zone is set for customers to purchase Apple products without any waiting. 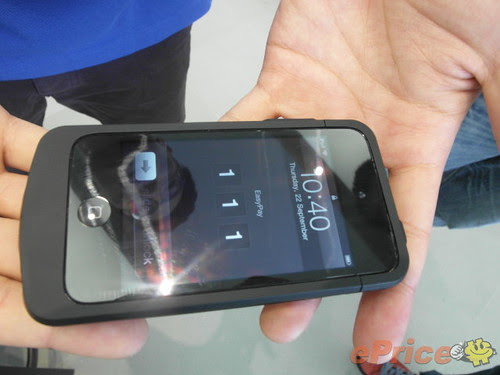 The new store is using iPod touch as a point-of-sale system (POS). 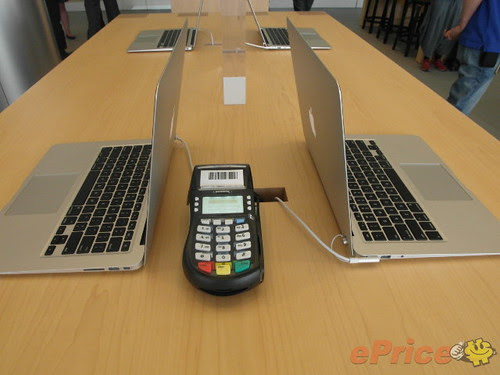 You definitely need a credit card, and the store will also except cash payment. 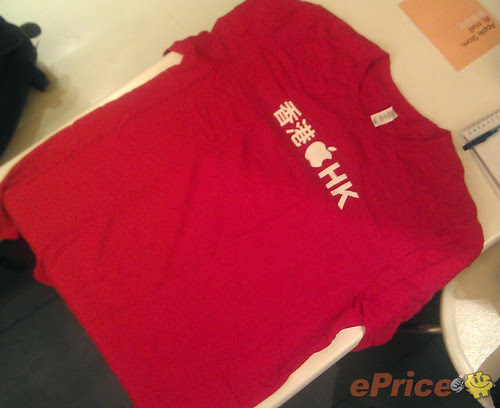 This is the free gift for the press and media. Customers should be probably getting this on the opening day … we think the souvenir t-shirt is ugly and it is made in USA, not China …

UPDATE 2:
According to local Hong Kong media reports, this will be Apple’s most expensive store to date, spanning 20,000 square feet and two floors in a posh Hong Kong shopping mall, and it costs $20 million to build. The store counts as China’s sixth Apple Store, after two in Beijing and three in Shanghai. Yes, Shanghai will have three Apple store before HK store grand opening, their third store will be first to open this coming Friday (September 23th). However unlike on mainland China, consumers in Hong Kong do not have to pay a value-added tax (sales tax); in China, the sales tax on Apple products is a whopping 20 percent!

On the opening day, rumor said that Apple will be giving away souvenir t-shirt for the early bird customers, and local Apple fans are preparing to queue overnight, as a ‘pilgrimage’ tour. There won’t be a 3 days celebration as we previously reported, but the HK store is certainly the 100th retail branch outside the U.S.. On the following Sunday (September 25th), Apple HK has a series of workshops, including OS X Lion tutorials, workshops on Garage Band, iTunes, and iPhoto etc. On the hardware front, there’ll be introductions on the iPad, iPhone and iPod, to help new customer getting started. Another localization effort at the Apple HK store includes guest celebrities from across Asia who will be visiting the store in October, to share their experience on Apple’s product.

Just coincidence, if you are touring in Hong Kong this week, feel free to pay a visit to the first Apple store in town! (by MTR subway, at ‘Hong Kong’ station). 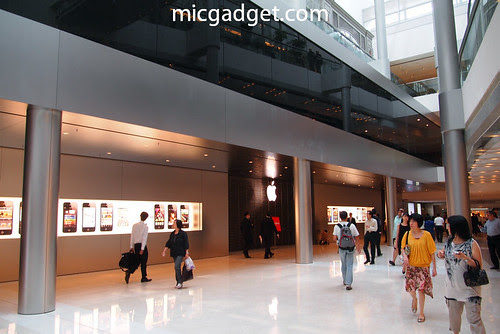 The main entrance of the new store. 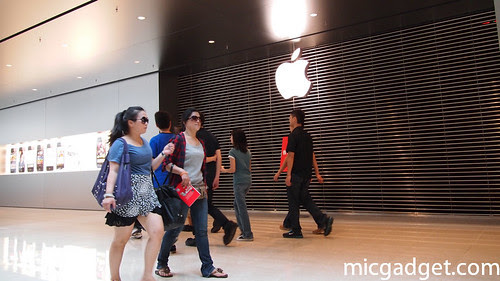 The new store is not opened yet until this weekend. 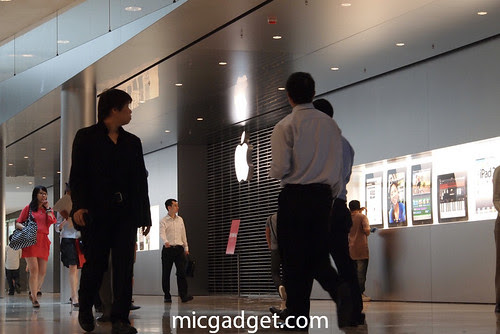 Commuters are curious about the first Apple store in town. 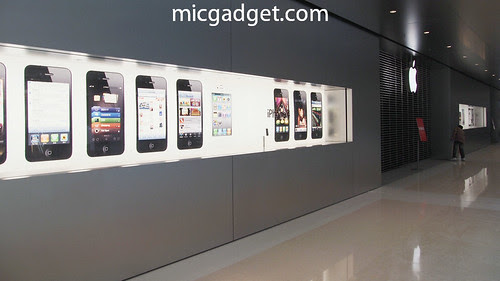 You can find very nice display showcase outside the store. 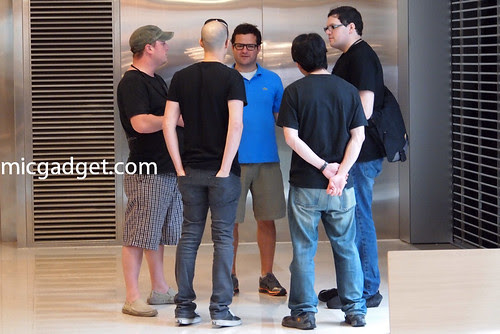 Looks like the management team for the HK Apple store. The brown-cap guy standing on the left, he is the head of Apple store, China region ( from our inside source ! ).

A branch of people gathered outside the new store, we believe they are the Apple employees. 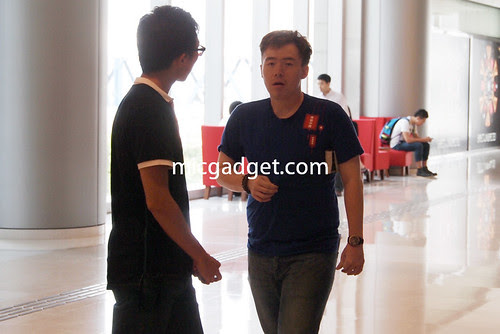 The tee shirt is nice! 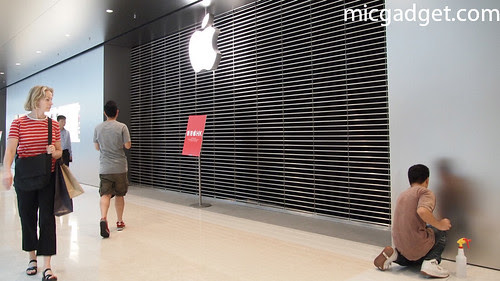 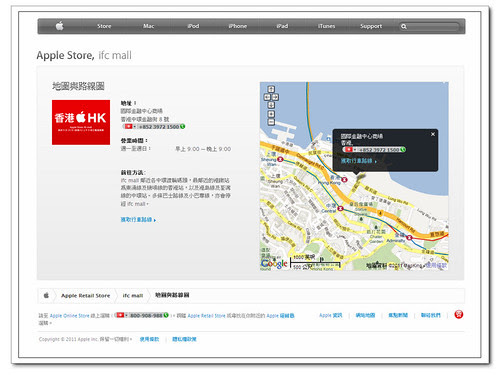