Turn Your iPad Into Apple I, Apple II (with video!)

Have you always wanted to own a fully assembled Apple I computer or an all-time classic Apple II? Did you miss the chance to buy a super rare Apple I computer at the recent Christie’s auction? Fret not! You can now turn back the hands of time with the iStation and make your iPad look like an Apple I or Apple II!

For “retro” Apple fans who “worship” the first Apple computer system — Apple I or Apple II, here’s your chance to see what they would look like when placed in your room or on your desk. The iStation looks kinda like an Apple I in a wooden case, or an Apple II. What is it actually? Well, it is unique in that it’s a stand, solid-performing speaker and keyboard in one. Most interestingly, your iPad acts as a display for the iStation, so the whole thing appears as a good looking piece of all-in-one tablet computer. 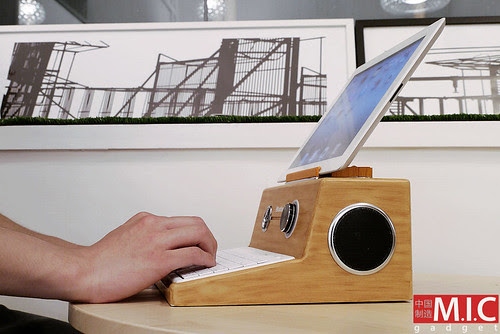 The iStation is a massive, sleek-looking behemoth that comes with powered stereo speakers with a huge and detailed sound and a small subwoofer. It comes with a detachable Bluetooth keyboard and it has an adjustable stand (3 different angles) for your iPad/iPhone. It also has a USB port, microSD slot and 3.5mm stereo audio input jack. 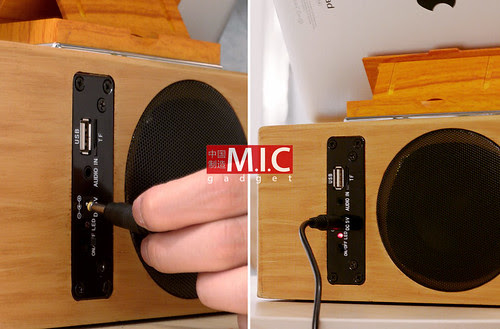 You need to plug the power adapter into the iStation to use it with the iPad. The iStation does not feature a built-in battery. 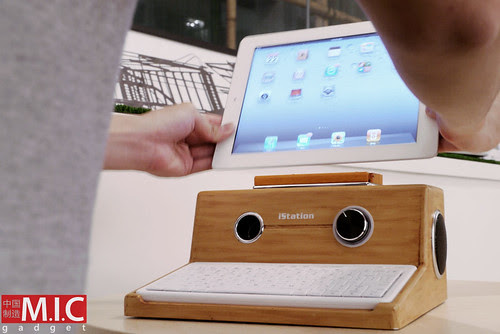 You can place your iPad in portrait or landscape orientation onto the iStation. 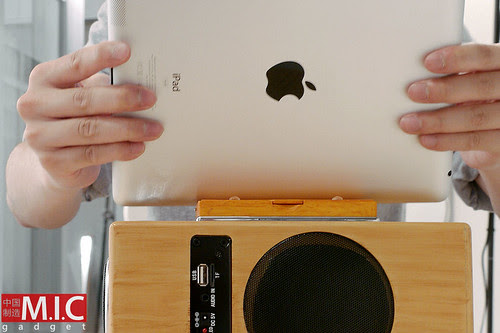 The built-in stand that holds the iPad has enough clearance for the first-gen iPad, and iPad 2 with thin cases. What do we mean by “thin” you ask? Well, any case that adds up to 1/8 of an inch. It even works with the Apple case and the Smart cover. 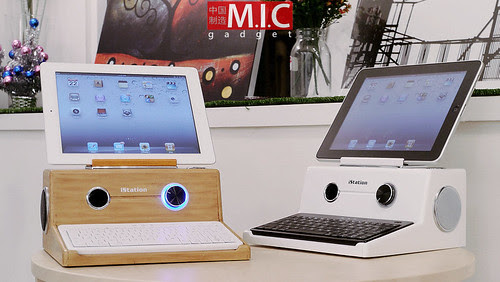 Due to its size, it is not really portable… 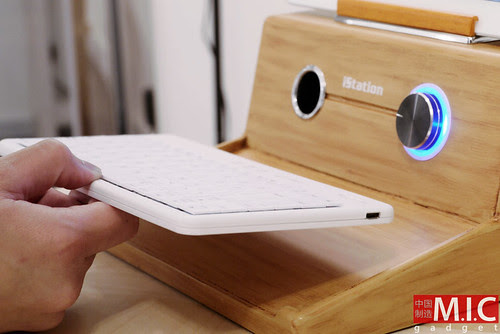 The keyboard is really light and can be brought almost anywhere. 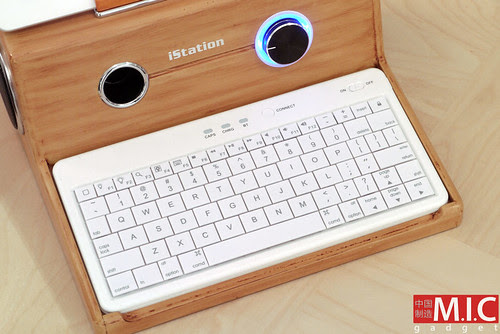 The keyboard comes with all the standard feature buttons and special Apple keys that let you use keyboard shortcuts like Cmd-C for copy, Cmd-V for paste, Cmd-Z for undo, etc. The top row keys double up as buttons to adjust brightness, volume, control playback and starting the slideshow. 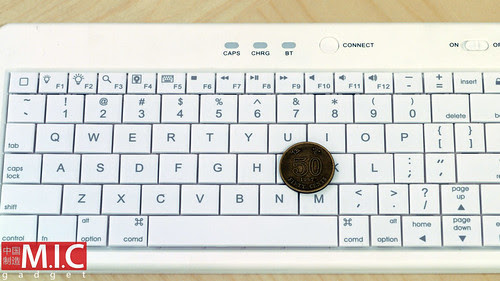 In addition to the Connect button, it has a power switch on the top right that lets you know at a glance whether it is on or off. Overall, the keyboard layout is excellent. Our only complaint is that the keyboard is a little too small for people with larger fingers. The keyboard is even smaller than the keyboards we see on 10-inch netbooks. 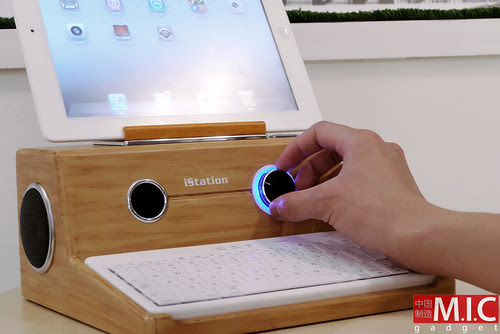 The speakers output superb quality sound that is crystal clear, even when the music is piped through the iStation’s own separate Bluetooth connection for audio. In addition, the iStation accepts auxiliary stereo audio input via its 3.5mm audio jack. These two audio inputs can be enjoyed simultaneously. As for the volume control knob, it is really smooth and there is no crackling or popping heard when making volume adjustments. 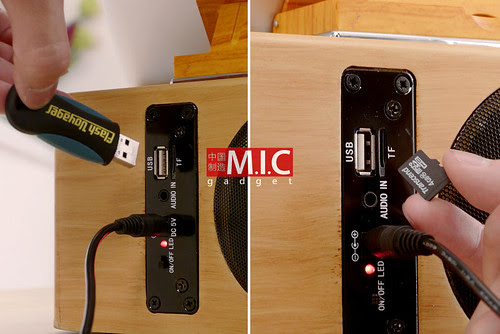 On top of that, if you insert a USB flash drive or microSD card loaded with MP3s, the iStation can also playback the music directly using the music controls to the right of the stand. 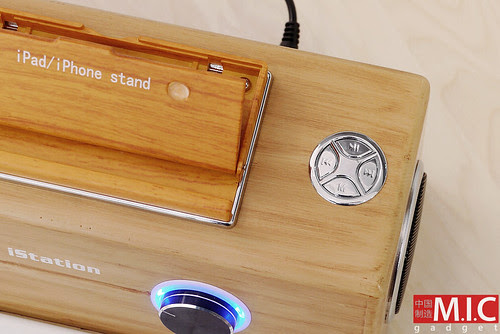 The music controls are cool, but we prefer a remote. 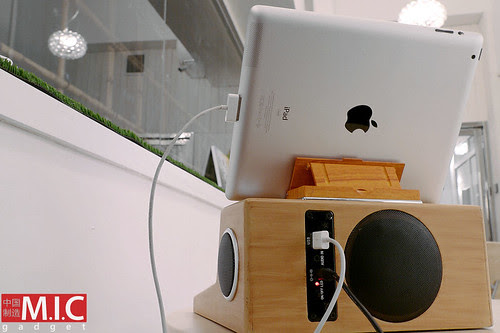 A neat feature of the USB port on the back of the iStation is that it allows charging of your Apple devices when connected. Although our iPad 2 shows “Not Charging”, it is actually in charging mode.

The iStation does exactly what it promises, delivering realistic, high-output sound from any Apple iOS device. It has a stand that firmly holds iPad, iPod, and iPhone devices and lets you rotate your iPad to view the screen in portrait or landscape orientation for the best video display. The compact wireless keyboard seems to be a bonus feature, and that make it looks like an Apple I or Apple II, but some of our friends told us that it looks more like an Apple III. Anyway, the main drawback with the iStation is the lack of an easy way to carry it with the iPad on the go. It weighs over 2 kg! It is intended as a desk-top system, but has enough cojones to dominate a small desk. So, the iStation is available in two styles; the Woodgrain style that is constructed out of plywood is perfect for Apple I fans who love the original Apple computer that started it all; the White style is glossy and made for Apple II fans who really dig the retro-styled beige / white boxes that were PCs. For just $85.90, it is the most bad-ass stand for the iPad.
Share this
Newer Post Older Post Home