iPad 3 has more tapered edges than the iPad 2, but a little bit thicker
What is the latest and greatest with the iPad 3? We have all the rumors, and all the purported specs covered. We also have an exclusive in depth look at the back shell of the iPad 3, as we have a production piece from one of our most reliable sources. Want to know more? Read on ~ Oh, and there’s one more thing: the “iPad mini”.

UPDATE 2: Purported X-ray images of iPad 3 unveiled. We received the X-ray images below from a Chinese source claiming the device in the images is an iPad 3. 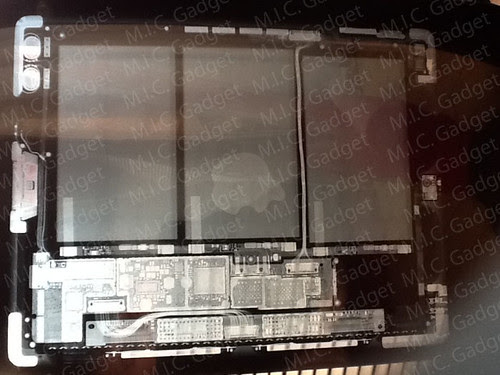 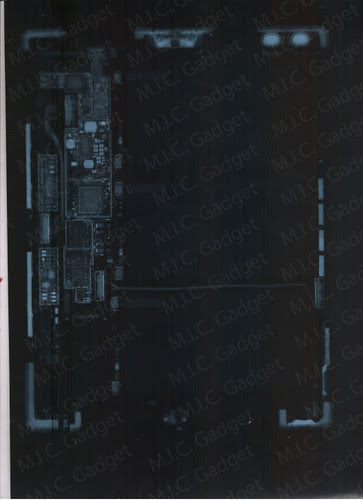 Purported X-ray image of iPad 3 in portrait mode (upside down)
Well, the externals of the iPad 3 is not going to be that interesting, but maybe the insides are totally different. However, MacRumors gave us a heads up and told us that the X-rays above are of an iPad 2, not an iPad 3. What do you think?

Purported iPad 3 front glass spy shot
The image above shows the glass front of the iPad 3. It is the same 9.7-inch size and shape as the iPad 2. The placement of the home button, as well as holes for the front-facing camera and ambient-light sensors, are also in the same places as the iPad 2. However, if you look closer, the ribbon cable which runs along the side of the display is the only real point of difference. That cable is much longer than the one on iPad 2. And the cable you’re seeing below, is the power/volume buttons cable for iPad 3. Comparing to the power/mute/volume buttons cable of iPad 2, it looks different.

It seems there has been a leak, a most incredible one, from a Chinese forum. 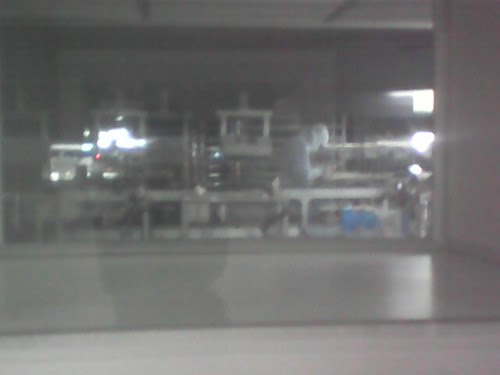 The photo above seems to be showing the production facilities for iPad 3 screens.

On the boxes you can see “Samsung” written on them, and the back of the screens have similar markings to the ones we have seen from Sharp and early test AU Optronic variants.

The photos were taken at Taiwan-based LCD backlight unit (BLU) maker Radiant Opto-Electronics’ plant in Wujiang city. The shots are blurry due to tight security measures in the plant. So, the photos do confirm Samsung being a screen supplier for the new iPad 3. These displays are Retina Displays, according to the poster. Also, the poster claims there are four iPad 3 devices at the plant as well.

Radiant Opto-Electronics has 4 factories, one in Taiwan, one in Nanjing, one in Guangzhou and the one you are looking at now in Wujiang. They specialize in TFT LCD screens of many sizes.

The factory in Wujiang has many clean rooms (a room pressurized with filtered air, no dust sources in the room), like the one you see in the photo below.

a clean room in Radiant Opto-Electronics’ plant
The factory is almost 130,000 square meters in size also, making it by far the biggest. It has roughly 5,000 employees working there, and is put in the Wujiang Economic Development Zone (WEDZ). This ensures low taxes, and higher profits for the Taiwanese company. Our source within the company indicated they will be working on Macbook Pro screens in March. This follows Apple’s supply chain diversification strategy.

Please note in our previous December story that we did accurately predict a Retina Display for the new iPad.

MacRumors confirmed iPad 3 has a 2048×1536 Retina display
However we do have some conflicting reports as well. According to the poster on the Chinese forum, there are no volume buttons on the iPad 3. Well, you can see from our iPad 3 rear shell (as shown in photo below) that there clearly is volume buttons. Our component is a confirmed rear shell for iPad 3 Wi-Fi + 3G model.

Moreover, if you compare the put together piece here, you can clearly see volume buttons. Thus, this would give conflicting information. This being said, we have asked our sources, and they have assured us volume buttons will be on the device. The Chinese poster on the forum also indicated that the bezel on iPad 3 is narrower. We think it could be possible, as it would help prevent the previous “light leak issues”.

Not to be outdone, Chinese Weiphone forums have come up with some interesting news as well.

a prototype iPad 3 logic board showing an “A5X” system-on-a-chip
If you look at this, it seems to be the iPad 3 logic board in some form. The chip numbering would lead us to believe it is an earlier prototype, much like the previous “developer” iPhone 4S. As many of you readers are aware, Apple product development usually makes a small change on a current device, then moves to bigger changes as hardware programming is complete. We believe this photo of what is claimed to be the iPad 3’s logic board showing an “A5X” system-on-a-chip would most certainly be a piece of an earlier prototype.

a side-by-side look at the iPad 2 and the iPad 3 rear shell
So rounding up everything we have seen and heard from our sources, this is what we believe the specs of the new Apple tablet will be: 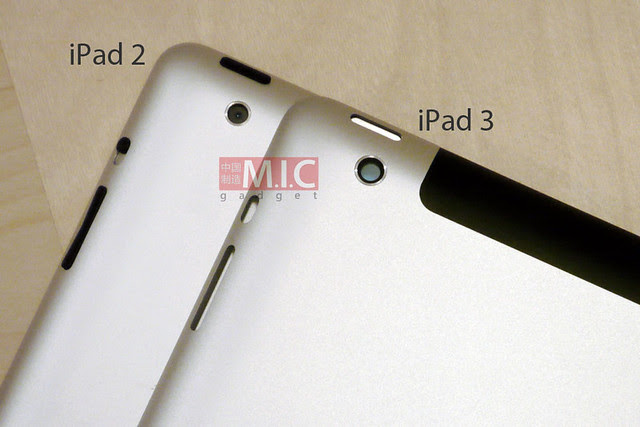 iPad 3 camera lens is noticeably larger than its predecessor 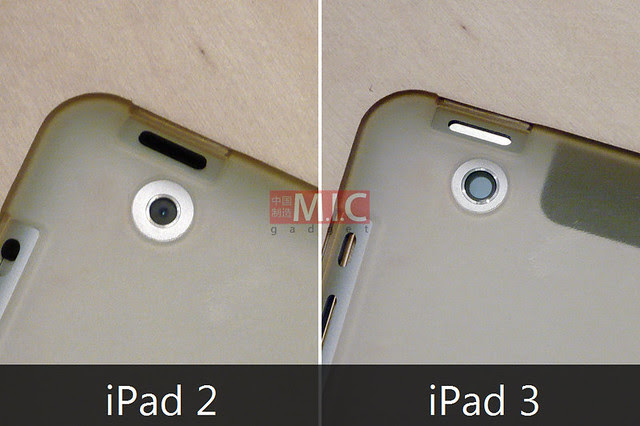 iPad 2 case fits the iPad 3 rear shell, and the iPad 3 camera lens is indeed larger than the iPad 2

iPad 3 is marginally thicker than the iPad 2 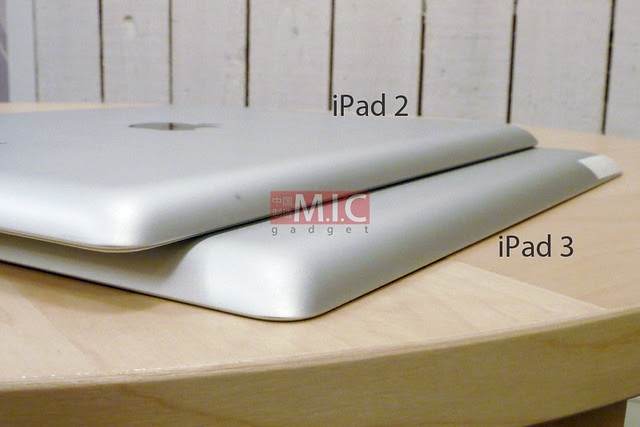 (note: there is Verizon and AT&T models confirmed for the US as before. However people have said internal builds have been around for the past couple of months. We will cross our fingers.)

We have heard from our sources that the launch date was going to be on Febuary 24th. This was to honor Steve Jobs with a product launch on this day. However, Chinese workers had at least one week’s holiday during the Chinese Lunar New Year holiday (started from January 22nd and ended on 28th), so manufacturing and supply line constraints have made that Feb 24 launch date impossible. Today, the launch date for iPad 3 is set for March 7. The Yerba Buena Center in San Francisco where Apple’s late founder Steve Jobs unveiled the iPad 2 last March is free on the day, which we feel is much more than a simple coincidence. Our inner sources have confirmed this.

One More Thing
According to one of our sources, a sub $400 device with 7-inch screen is in development. The device, excelling in iOS gaming and multimedia, will come with a tapered design seen in the iPad 3. It will be offered with a low voltage ARM processor, a powerful GPU, and a large battery. It will enter into developing nations like Brazil and China, and compete with the smaller tablets. It will have some sort of wireless keyboard that’s not efficient on power, so a low voltage ARM chip is being used. The device will get a Q4 release date, as Apple is preparing to release it in time for Christmas 2012.