The Ultimate All-in-One Card Reader for The New iPad The new iPad features a huge jump in screen resolution with the Retina display, making the iPad perfect for watching 1080p video and viewing photos with incredibly high megapixel amounts.

So what if you are a professional photographer or cinematographer and you would like to make full use of your new iPad? Well, along with the new all-in-one card reader, you can transfer images and videos from your CF card or SD card to the iPad. Preview them in the field, edit the photos using iPhoto, or edit the footage with iMovie.

Using In The Field (for photographers)

With the all-in-one card reader, you can access your images in the field and view them directly from your camera’s CF/SD card on the new iPad. We tried to shoot 14-bit uncompressed RAW straight to a CF card on the D800. And import the 36 megapixel uncompressed RAW files into the iPad. We found out that a full resolution RAW can be imported into the iPad, and thus, we are able to edit a 36 megapixel RAW image using iPhoto on the iPad. 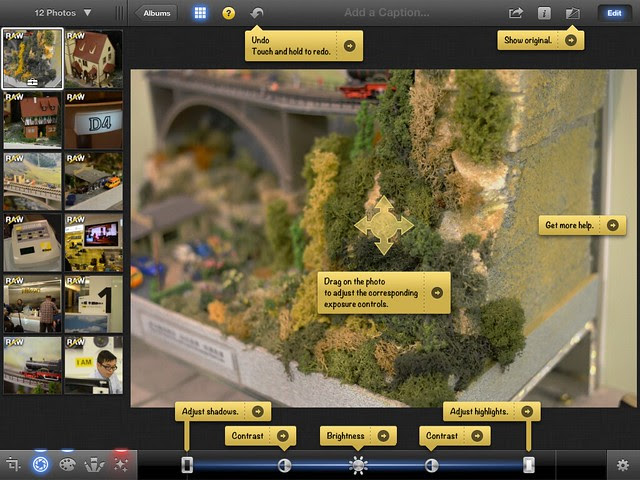 Editing RAW image in iPhoto
With iPhoto, we start doing some quick post processing like making adjustments to the exposure, white balance, and contrast. We even tried to choose from dozens of photo effects to change the look and feel of the image. Then we do the pinching, zooming, or sliding to adjust an effect. And just like that, we’ve applied some of the professional edits in the blink of an eye.

Then we move on and convert the 36 megapixel 14-bit uncompressed RAW file into JPEG using iPhoto, and the process took us less than 20 seconds. Our 36 megapixel RAW file gets resized down to a 11 megapixel JPEG file. 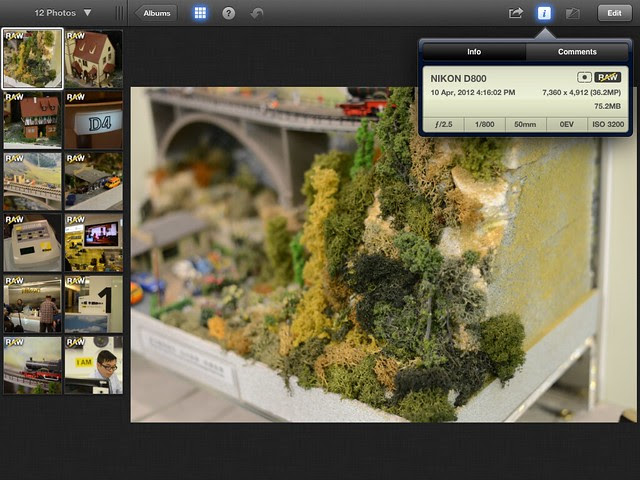 viewing D800 RAW files in iPhoto
A 14-bit RAW file (uncompressed) coming from the Nikon D800 will average 75MB. We popped the SanDisk Extreme Pro 16GB CF card with 14-bit uncompressed RAW files from D800 into the all-in-one card reader. Amazingly enough, the iPad is able to read the files! We can import the 14-bit uncompressed RAW files from the D800 to the iPad and they will appear as regular photos in the Photos app, iPhoto app, and third-party apps. The RAW files are not resized within the iPad photo app, and when we transfer the images off of the iPad to our computer, the RAW files maintain their full raw integrity.

We also tried to import 14-bit lossless compressed RAW files from the D3X, and the all-in-one card reader had no issue reading the RAW files from D3X. However, some of the kinks we encountered during our testing is that when we import RAW images from Canon 5D Mark III, the RAW files become JPEGs after the import. And they are resized down to 5.5 megapixel. When we are importing the RAW images from the D800 and D3X, they are not resized in the import process. 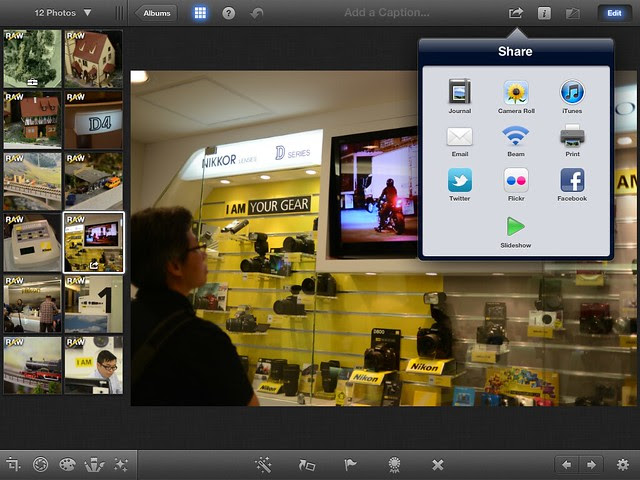 iPhoto supports social sharing through Facebook, Twitter, Flickr, email, and more
On iPhoto, you can tweet a photo. Or post shots to Facebook and Flickr. In our case, we tried to upload a 14-bit uncompressed 36 megapixel RAW image. That may be ridiculous since who really needs to upload 14 bit uncompressed all the time? Well, we still have to try and here’s what we’ve discovered.

Using In The Field (for cinematographers)

For the video part, we have to focus on the new iPad. Comparing to the iPad 2, the new iPad has more powerful GPU, and doubled system RAM. These two features actually benefit cinematographers. With the all-in-one card reader, we manage to import 1080p footage that was recorded using the ALL-I codec on 5D Mark III. And 1080p footage from Nikon D800. 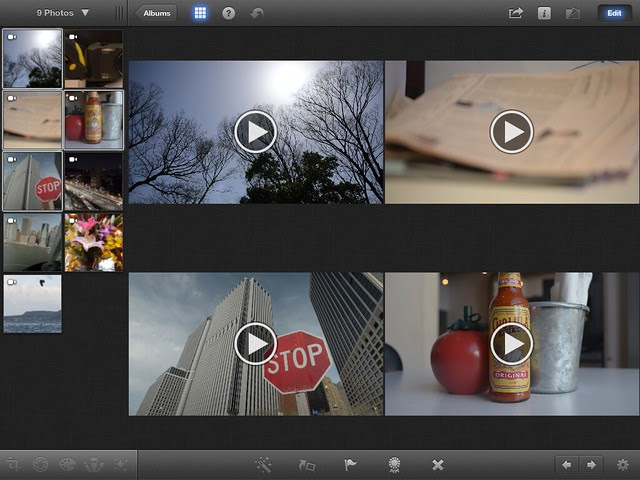 viewing D800 footage in iPhoto, able to preview four clips at the same time
After importing, we play the footage on the iPad. All footage playback just fine without lag. Then we tried to preview the footage in iPhoto and guess what, there’s a “hidden” feature in iPhoto that allows users to playback multiple clips at the same time. So you will be watching two clips, three clips, or even four clips in real time. However, playback may be choppy when four clips are being played together.

Speaking of using the card reader in the field, here’s an example. If you are covering an event, let’s say the NAB show, where you will be doing some hands-on video with new video camera equipment that are displayed on the floor, the all-in-one card reader will be a useful tool for you to import videos into an iPad and edit them with iMovie. 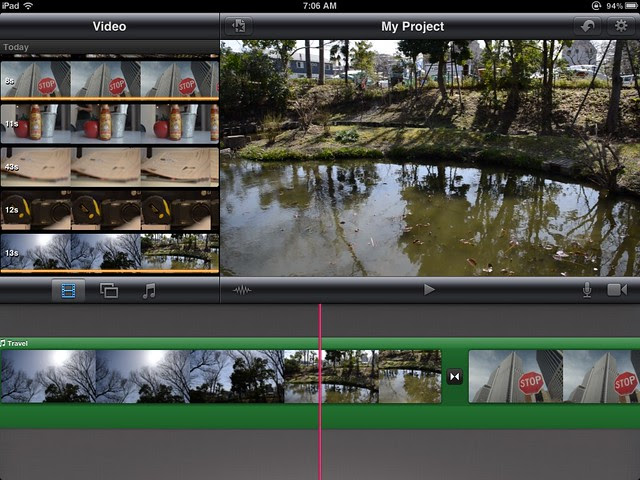 editing D800 footage in iMovie
After doing some tapping, swiping, and dragging, you’ll publish the project right from iMovie to YouTube or Vimeo for people to see. 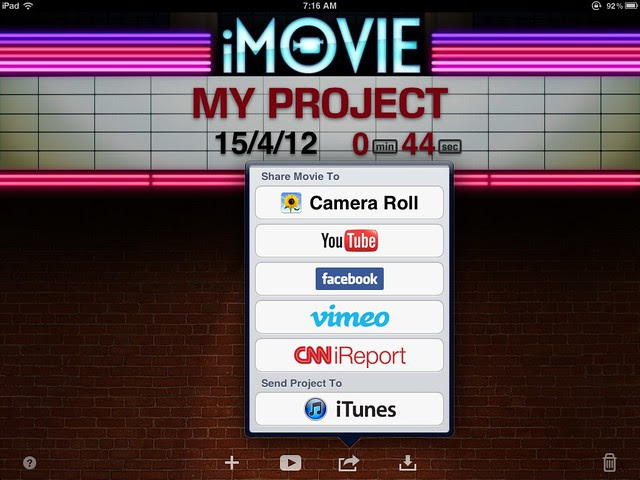 Here’s one thing to note: If you are exporting the project to the Camera Roll, you get to choose “HD-1080p” option. Sounds good, but here’s the bummer: there are no options for you to choose to export to 24p or 25p. iMovie will export your completed movie to 30fps (not 29.97) and 44.1 kHz (not 48.1 kHz) by default. Next, if you are exporting out to Vimeo or YouTube, you get to choose:

One big concern for photographers hoping to use the iPad in the field is speed. If you want to use an iPad as a place to offload files during a shoot (perhaps to give clients an instant preview of images on a bigger screen), it’s important that the iPad transfer times be reasonable. So we tested the time required for images to be imported from different cameras and memory cards, for storage and display on the new iPad. Check out the lengthy video of the test below.

And the following table shows the time for importing JPEG images in different amount of megapixel. 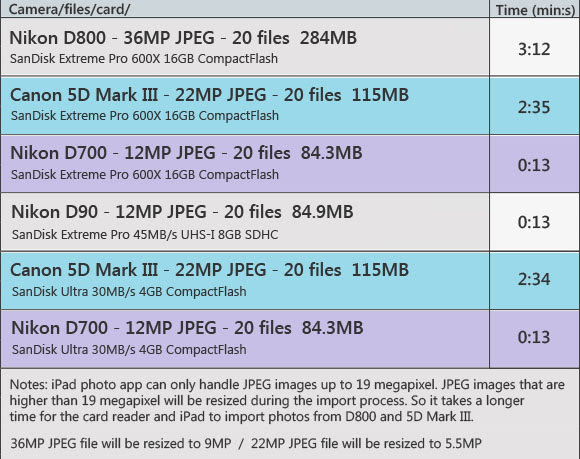 What’s worth mentioning is that we filled a SanDisk Extreme Pro 16GB CF card with 22 megapixel JPEG files, then put the CF card in the all-in one card reader. The iPad took 5-10 seconds to load the card, and 2 minutes and 35 seconds to import all 115MB worth of files. We repeated the test with a different CF card — the SanDisk Ultra 30MB/s 4GB — and the files took 2 minutes and 34 seconds to import. Interestingly, the times are about the same. Same case for the 12 megapixel JPEG files from the D700. From these two tests, we found out that transfer times will probably be roughly similar with almost any CF card in the market. In fact, the throughput bottleneck appears to be the iPad itself, or the Dock Connector port.

There’s good and bad for Apple’s iOS “security” file system restrictions. The good: Not necessary to do a lengthy import onto your iPad, iOS will resize JPEG files that are higher than 19 megapixel, thus smaller file size for faster transfer. The bad: You will lose image quality when iOS resizes your 22, 24 or 36 megapixel JPEG images, but that doesn’t actually matter when you are just previewing the photos on a bigger screen in the field. Your original JPEG images still live on your memory card.

As for the process of importing 14-bit RAW + 36MP JPEG into the new iPad, it really takes a long time to transfer the files. Yes, both JPEG and RAW will be imported, but the two files will be represented by one optimized JPEG. Both original files will be stored on the iPad and sync with your computer. So, if you shoot and import RAW + JPEG, the stock Photo app will only allow you to preview the JPEG, you can’t preview the RAW file at all. And the JPEG image will be resized if it overshoots 19 megapixel, and that’s the optimized JPEG we’re talking about.

And the following table gives you a clearer look at the test results. 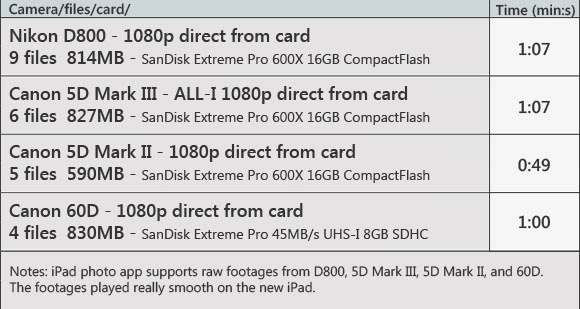 Yes, we have successfully transferred Canon DSLR (5D Mk III, 5D Mk II, 60D) 1080/24p and 1080/25p video to the new iPad via the all-in-one card reader while having the ability to playback the footage on the iPad.

As for compatibility, here’s the list of the memory cards we have tried:


All of the above cards were compatible. In a situation, the iPad’s import screen refused to appear when the Transcend 400X 32GB CF card and the SanDisk Extreme Pro 600X 16GB CF card were in the all-in-one card reader. The problem is that there’s no DCIM folder at the root level of the card. So, we manually create a folder named ‘DCIM’ and boom! The iPad import screen appears and we see thumbnails appearing right in front of us.

Look and Feel of The All-in-one Card Reader The build quality of the little connection device is pretty good. It is made of plastic, and coated in a piano black gloss finish. However, we prefer matte to glossy. We don’t like the shine on the glossy and all the fingerprints that accumulate on it. As for protection, a dust cover is included for the dock connector, and the card reader comes with a pouch. Overall, the all-in-one card reader is small enough to fit in your pocket, yet sturdy enough to take daily abuse out in the field. 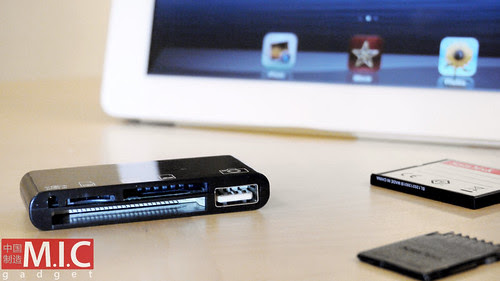 Here’s something to note about the CF slot on the all-in-one card reader: When we’re shoving our CF card into the slot, we noticed that the pins in the CF slot can be easily bent if you are not inserting the card straight in. When you insert a CF card into the reader, the card pushes quarter-of-an-inch into the unit and then it finds two guide rails which run about half-an-inch taking the card to the pins where it’s pushed home. Some card readers have very short guide rails and it’s very easy to misalign the card causing the pins to bend. So, the CF slot is just deep enough to allow the card to be inserted along the guide rails, with satisfactory contact to the pin connectors. 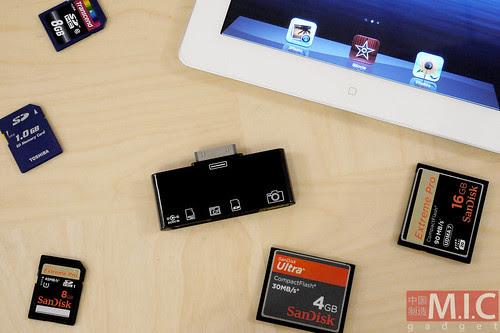 Forget Apple’s official iPad camera connection kit, with its separate USB and SD card slots. This little guy lets you transfer files via CF, SD, microSD and USB all in one dongle.

For photographers, they can shoot RAW files and import them into the new iPad with the all-in-one card reader. Then they can open the RAW files and edit them right on the spot. The best part? The RAW file will not be resized or optimized during the import process. So you can go ahead and edit a full resolution image. The whole process allows a photographer to view, manipulate, and send off photos while still in the field.

For cinematographers who are using DSLRs for filmmaking, the all-in-one carder allows them to import footage directly from the memory card into the iPad to view the footage on a bigger screen. What’s more, it’s possible to do editing in iMovie, which is useful for journalists when they are covering a trade show. Shoot the video, import it to iPad, edit it, and upload it to YouTube or Vimeo. It may be useful for wedding cinematographers too, especially doing a same-day edit.