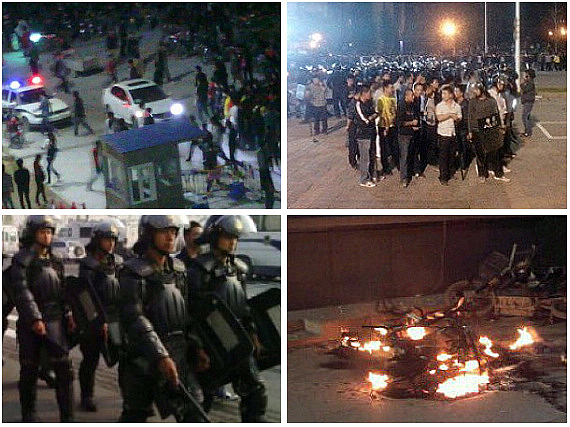 Things just cant get any better for Foxconn in China. We have exclusive news on a riot breaking out at Foxconn’s Taiyuan plant, the main location where 57 million units of iPhone 5 need to built for each year.

2,000 workers were involved in the mass brawl at the factory, and 5,000 police officers were called. But the most terrible thing is that at least one iPhone 5 production line got damaged. More details and videos after the jump.


“We can confirm that there have been no employee deaths related to the incident which took place at an employee dormitory in Taiyuan last night. Reports to the contrary are inaccurate.”


Before you read on, here’s one fact you must know: Foxconn has a plant in Taiyuan, which is the largest city in Shanxi province. The factory is in the middle of the city, employs roughly 79,000 people and makes products for a variety of companies. This particular factory specializes in assembly of manufactured components and stamping of metal.

So, today, what makes this incident special is last March and April, the very same factory went on strike. This particular factory is noted for its very high mandatory overtime requirements and poor working conditions. We outlined this in our special undercover report here. One of the main complaints is that the security personnel are very strict and don’t treat the workers well. Our inside source has told us that this is what set off the incident today.

Since another incident in June at the same plant where a small group of workers bravely stood up to the factory boss, but were put down we would imagine things have been grim at the factory.

The Trigger of The Riot

Our sources indicated that one of the security guards hit a Foxconn worker and this made even more of the workers angry and they started to beat up the security guard and others who tried to stop the fighting. Eventually as the Foxconn hired security was overwhelmed rather quickly, they called for backup. They have said it is a dispute between “workers” that started between 10-11pm on September 23rd. However it rapidly escalated from there.

We are told that several gangsters from Shandong and Henan got involved later in the fight as people called them on their cellphones and they came. We theorize that some gang members must be working at the factory if this is true. This rapidly escalated into a bloodbath with many people getting injured. It continued it until midnight.

Around midnight the various arms of the Chinese police showed up, ending up at about 5,000 or so by 3 a.m. when the factory was under control. We are told by people at the scene that cellphones were being confiscated and erased and many people have been arrested. The official number is around 100 arrested but we are sure from what the tipster told us it is many more than that. Even worse as the workers and others fled the scene many people were injured by trampling, on top of those who were caught up and injured in the fighting. Around 40 people are in hospital, but again we suspect many more. We also have unsubstantiated claims of many people dying but we don’t know what conclusion to draw at this point.

The police in Taiyuan are not commenting at this time and our attempts at reaching the Foxconn representatives have met with failure also. Even worse all the pictures on the Chinese internet are being blocked slowly. It is hard to get any updates at this time as the whole plant is under lockdown and we are told nobody is to leave residential quarters. Below are more photos showing the damage caused by the riot.

To complicate things, as is standard with all Apple contractors who produce the products, Apple has its own employees in the factory this event happened also. They are usually involved with quality control and assigned to improve efficiency. At this factory, below 100,000 workers but above 50,000 workers 4 would have been present. Where they are is unknown at this time.

Armed forces are on their position in the next morning when the factory gets locked down
To address the issue, Foxconn spokesman Louis Woo (Foxconn CEO Terry Gou’s thuggish righthand man) has told Reuters that the company is investigating the cause of the fight happened in the factory,


‘The fight is over now … we’re still investigating the cause of the fight and the number of people involved,’


‘Our decision is to take a day off for that particular plant today.’


Well, Woo also said the company will issue a statement later on Monday.

However, the worst part is that we are told many of the people who were arrested weren’t involved in the fighting at all. They deliberately went and damaged the factory. As we outlined previous, iPhone 5 is selling at a high price, and there is a shortfall on supply as there always is at launch. This Taiyuan factory is an assembly factory for Apple’s iPhone 5, we have already confirmed this prior even if Foxconn refuses to do so. If the assembly line has been damaged, it could mean iPhone 5 shortfalls for even longer. This is bad news for Apple fans. Below are more photos showing the police forces who were called in to break up the fight and keep everything under control till the next day.

One more thing. Foxconn stock is down as of this morning, this doesn’t bode well at all for the company. Its PR is always a mess, from suicides to overworking it truly is a sad place. We are told the factory will be locked down for 2 to 3 days while everything is investigated and damage is assessed. We will keep you informed as this story develops. Here’s a question, are iPhone 5 production pressures responsible for the riot at the factory?
Share this
Newer Post Older Post Home