More Apple Stores in China, Will This Help to Meet the Demand of iPhone 5 ? 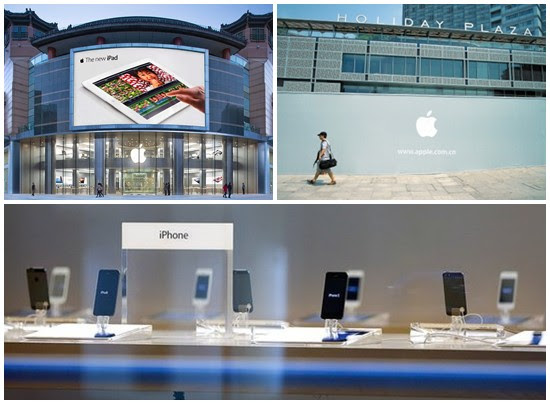 Apple is gearing up to open its third store in Beijing. Taking the title as the largest store in Asia, the three-story location demonstrates Apple’s heavy investment to court the Chinese market.

The new store in Beijing brings the total number of Apple Stores in China to six. China is also getting their 7th store relatively soon, the upcoming first Apple store in Shenzhen. Media reports leaked out showing workers installing lights and tables for the new store. Apple is also planning more stores in other cities like Dalian, Chengdu and Guangzhou. The company’s goal is to eventually serve many customer in every major cities, however, we are concerned about whether this will help to meet the high demand of iPhone 5 in the country. A Chinese casual consumer just want to know whether they can easily purchase an iPhone 5 while they walk-in to the new store …

As we mentioned before in our stories covering other Apple stores opening in various other cities in China, Apple is making its big push. However they are still having significant difficulty finding store leader and appropriate location for Apple store use. We would like to say again that an Apple store in China has the highest traffic of any Apple stores in the world. This entails 4000+ people in and out per day. In smaller stores like Xidan Joy City and Sanlitun which located in Beijing, this can be quite difficult for both customers and employees alike. Apple actually wanted to open the first store at Dongcheng district, where it’s a bustling commercial area in the city, but in the end settled for Sanlitun instead. This was because the delay of the city construction during the 2008 Olympic. What they ended up with was a rather small store which is not up to Apple Store standards. The second store Xidan Joy City again is a very small one, so unlike say the Pudong store or Nanjing Road store in Shanghai, the size of the two Apple stores in Beijing are small and over-packed. 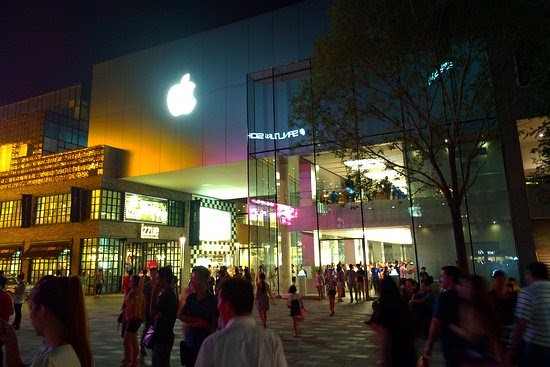 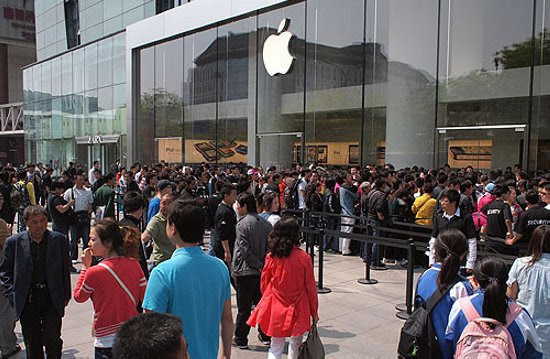 Beijing’s second Apple store, Xidan Joy City, which is fairly small in size.
Now we all knew that the new store located on Wangfujing street will be much bigger than either two existing stores. This would match the three stores in Shanghai. The third store in Beijing is located at one of the most famous shopping streets. The majority of the main shopping area is pedestrianised and is very popular for shopping for both tourists and residents of the capital. This is a very good advantage for Apple as it can bring considerable revenue and hopefully relieve some of the thorny issue the other two stores have. Many Apple’s customer has tried to get genius bar appointments at both stores and had great difficulty due to demand. This is on top of the difficulty with getting new Apple products at launch. You will remember the fiasco relating to the iPhone 4s’ launch in January. Eggs were thrown, fights broke out and it was just nasty. Apple doesn’t want to see such a scene again in Beijing.

The Wangfujing Apple store is the first store which has over 400 employees worldwide. This is to help the service of the customers and improve service times in both Sanlitun and Xidan Joy City. The store is designed to allow long lines and it’s also very close to a major public security bureau station, what happened before during the product launch will not be repeated. Apple chose this location because of this, and the street outside the store is much harder to get crowded quickly. 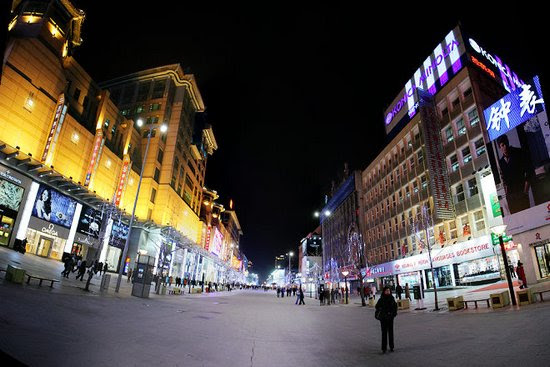 Wangfujing street is one of the most famous shopping location. 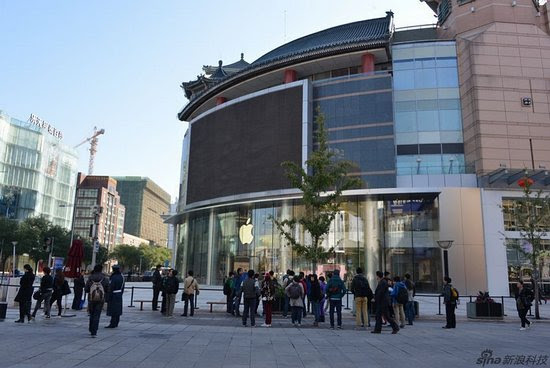 The third Beijing’s Apple store is the largest store in Asia.
On top of this, Apple is expanding into the other side of the Hong Kong/Shenzhen border to stop the grey market transactions that occur there. While there is no doubt Shenzhen is a very lucrative city to be in, with both Hong Kong and Shenzhen covered it would mean that most grey market sellers would have difficulty selling product immediately and would have to ship them to inner China. Most grey market people do not have this supply line, so it would make business harder for the considerably. Apple seems to be following the Beijing model in Shenzhen, emphasizing preparation speed over store size. We hear rumblings of recruiters are still going on, interviewing people for positions and training has started a few months ago. We estimate a 150+ employees for the first Apple store in Shenzhen’s Yitian Plaza. And this is the first Apple store in southern part of China, and it is located at the city where previously most of the i-products have been produced.

Apple is splitting China into two markets section. One is northern China, with all of the 3 Beijing and 3 Shanghai stores encompassing this. The existing store leader in Shanghai Pudong who doubles as the current market leader for China will handle the northern China region. For the upcoming Chengdu, Guangzhou, Shenzhen and other Apple stores located in south China, there will be a new store leader in-charged of that. This will allows Apple for a much easier expansion in China market. 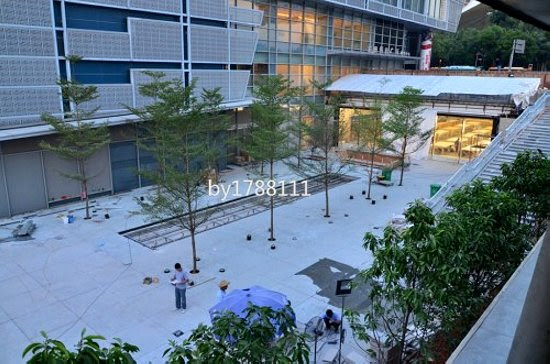 The Shenzhen’s first Apple store will be opening very soon.
Official sales of the iPhone 5 in mainland China have yet to start. During this period, Chinese customers wanting to buy the iPhone 5 have resorted to purchase the product from grey market vendors, who bring in products from outside mainland China only to sell at a higher price. Apple temporarily suspending all iPhone 4S sales at all its physical stores in China early this year. To help avoid skirmishes at its stores, Apple implemented a new reservation system for customers wanting to buy its latest products. Chinese customer are not allowed to walk-in to the store and purchase the iPhone 5, Apple will pick and select who they want to sell it to. All this comes to one big important question. No matter how many Apple stores open in China, consumer still won’t be easy to get an iPhone 5 when they want it. In the end, this selling method is just creating a bad shopping experience for the Chinese customer. Scalping, shortages and a thriving grey market, the same problems will still exist and the reservation system will continue, so what does Apple stand to gain ? 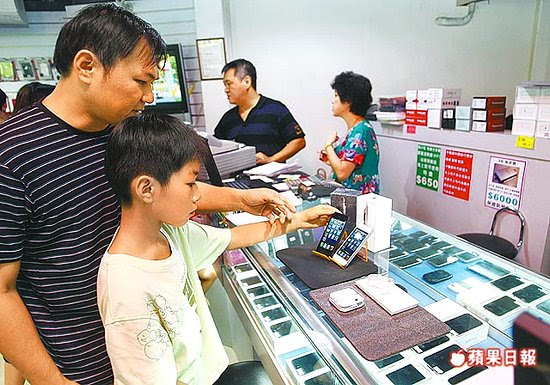 Most of the Chinese are buying the iPhone 5 through grey market.
Everyone thought that the opening of the new stores in China could help alleviate the huge demand for Apple products, however, Apple has a serious issue unique to the China market. It is very hard to find a good location with huge storefront that is suitable for an Apple store in China. When a good spot is found, wrangling for a proper agreement and the cost of renting can take years. This is very difficult in comparison to other countries.

There are so many Chinese customer come through the doors everyday, it is difficult to get the level of service that is expected of say an Apple store in the U.S. Booking a genius bar appointment in Beijing’s Apple stores, you will be in a long waiting list. Are you a walk-in ? Expect to wait an hour or more. It’s always cramped and noisy at the genius bar. Apple’s benchmark NPS (Net Promoter Score) which measures how satisfied customers is noticeably down at all Chinese stores. The NPS of all the Beijing stores is below 40 percent, according to our insider source. Now for the worst part is, most of the Chinese consumer are expecting when there are more Apple stores open in their country, it suppose to be easier to get an iPhone, but the result is they are still restricted to buy one. The retail market in China is not working in this way. 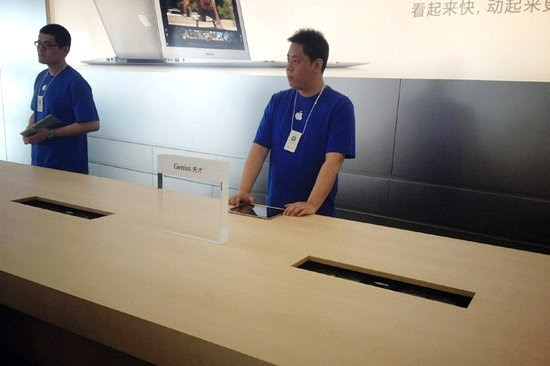 The new Genius Bar in Wangfujing has double-row, providing
360-degree access by employees and customers. 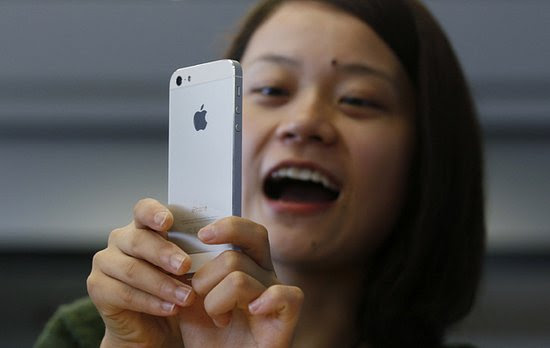