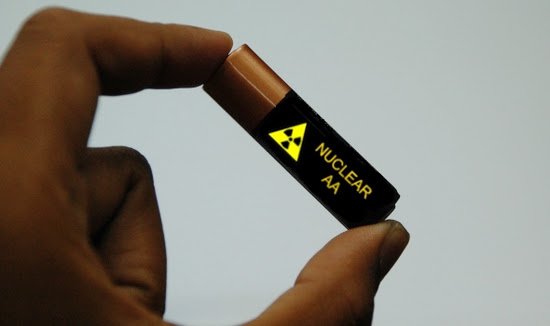 Chinese online sellers are selling “nuclear battery” at Taobao.com, the marketplace for online shopping in China, which is similar to eBay and Amazon.


Updated.
One claimed that the battery could last for 20 years without charging and priced at 6,980 yuan (USD $1120). Another seller claimed that — “The battery is powered by the technology of atomic bomb, it’s stable and reliable and could last for thousand years, you only need to pay 12,000 yuan (USD $1928)”. The so-called “nuclear battery” is actually Nano-tritium battery which is produced in America. Many buyers want to know whether these battery could use for powering up their phones, laptops or even electric bike …

The Nano-tritium battery is made up of a layer of radioactive tritium. The amount of Tritium that extracted from one liter of sea water, can release energy that equivalent to burning 300 liters of gasoline in one complete nuclear fusion. It’s an adult’s thumb-sized battery and can produce energy by using betavoltaics. The battery can last 20 years or more in the most extreme conditions. In fact, it is actually only capable of generating a few nanowatts of power, so it is not capable to power some of our energy hungry gadgets such as smartphones. It is primarily designed for very small devices such as sensors and implants like pacemaker. This kind of battery is already regularly used, for examples, self-powered exit signs, glow sticks, and diver’s watches. 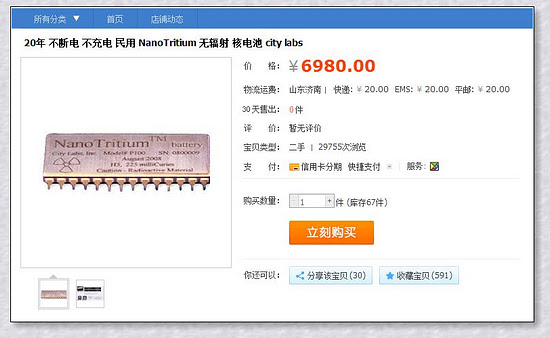 Chinese consumer can easily buy a “Nuclear Battery” from internet. 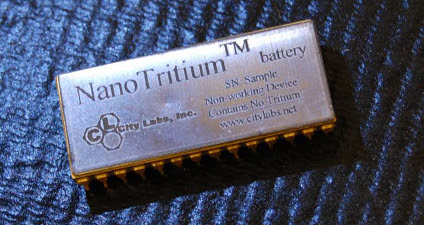 The thumb-size battery is came from America, not made-in-China.
Now we all know the “nuclear battery” can only run micro-electronics. If the Chinese want to use it for powering up an electric car, they might need truckloads of these tiny batteries to make it happen. The online seller told buyers the price of 6980 yuan (USD$1120) is just the down payment, they need to pay another 10,000 yuan (USD$1600) to complete the deal when the battery arrived from America. It really sound like a fraud …