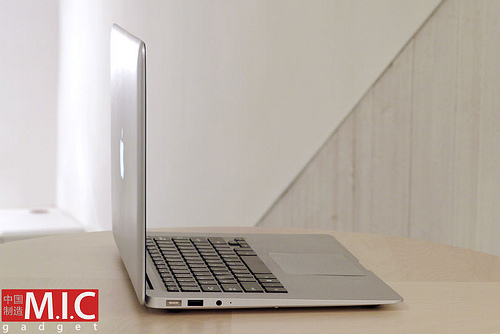 Chinese knockoff makers gets into the super-thin notebook game in a big way with the $499 AirBook. We’ve played around with it for a while now and can say that it looks very similar to Apple’s MacBook Air, and it’s very cheap. Unfortunately being cheap comes at a price.


We went to Huaqiangbei, the best place to shop for electronics, digital products and knockoffs in Shenzhen, to purchase the AirBook for review. When planning our review of the AirBook, we knew we would need two things: Apple’s MacBook Air for side-by-side comparison, and a lot of time to test out the performance in our daily usage. After getting ready these two things, we start to review the AirBook.

Make no mistake about it — the AirBook is a proper knockoff product, with many (though not all) of the capabilities of something like Apple’s MacBook Air. But the focus on this product is most certainly… how similar are the AirBook and Apple’s MacBook Air? Can a $500 knockoff take on Apple’s ultra-thin notebook? Does the release of this product lead to a C&D letter from Apple? We will attempt to answers those questions — and more — in our review below, so read on!

Some people say imitation is the sincerest form of flattery, the AirBook has no shame with the design and that could be mistaken for the MacBook Air with its sleek lines, and ‘teardrop’ shape that is slightly thicker. It has a distinct MacBook Air-like feel, but it comes with a silver plastic body (in matte finish) and we can feel it’s all plastic interior, and you would not believe this, the entire piece of plastic is sprayed with silver/steel spray paint to look like aluminum.

The AirBook is an incredibly thin and light notebook computer. It measures just 13.1 inches by 8.82 inches (with a thickness of 0.75 inches tapering to 0.2 inches at its smallest point), and weighs a meager 3.1 pounds. We spent a lot of our time with it, and we can tell you that even it’s thicker and heavier than Apple’s Air, it is as portable as the real thing. We think the knockoff makers have tried their best to perfect the AirBook down to the millimeter.

We felt opening the laptop wasn’t always as easy, but it doesn’t hurt it. There’s a big, glassy and buttonless touchpad situated in the middle of the full-sized palm rest like on Apple’s MacBook Air. The touchpad supports multi-touch, but the moment you put your finger on it to click, you will feel the difference. It’s not quiet, and brings us a clunky sound and feel as we click away.

The keyboard above, too, has a good feel. Keys are springy and solid. The keys are plastic, and they have a not-too-slippery finish that feels just right beneath the fingers. However, bad things start to appear when we start blogging on this machine. As we typed, the keys often failed to register our presses if we moved too fast or dug our fingers in too lightly. We made fewer errors when we made a concerted effort to press keys firmly before moving on, but what experienced touch typist wants to do that? On the other hand, it’s more than a little disappointing to find that the AirBook doesn’t have a backlit keyboard. You can’t do things like adjust volume, change track, and hit that damned Windows-logo key in the dark.

When it comes to display you can notice the difference: the AirBook features a 13-inch 1366 x 768 glossy, LED-backlit widescreen panel. We spent our time testing the AirBook and, we think the contrast, brightness, and viewing angles of the display is satisfactory. The 1366 x 768 resolution is pretty sickening, it gave us less space to scroll through web pages and documents. We still found its resolution to be more than adequate for most tasks but just a bit limiting for anyone working on photos or doing anything where pixels really count. Moreover, we hate glossy screen, and no, you can’t option out a matte unit.

Let’s have a tour around the edges: you’ll find a MagSafe-like connector on the left side, along with a USB 2.0 port, and a dual headphone / mic port.

Over on the right you’ll find a mini-HDMI port, along with another USB 2.0 port and an SD / MMC card reader.

This is perhaps the most bad-ass feature on the AirBook. Just like Apple’s whole line of MacBook, the AirBook comes with a MagSafe connector. The power cord is held in place magnetically, so if someone should trip over it, the cord disconnects harmlessly and the AirBook stays put safely.

The knockoff makers failed to make sure the AirBook won’t falter when it comes to features. The AirBook has a multi-touch trackpad, but it’s not as responsive as Apple’s MacBook Air at times, and that can be frustrating. It’s a deal breaker, but it’s the worth mentioning.

After spending more time with the touchpad, we noticed that this giant clickable pad sometimes mistook our left clicks for right ones — a quirk we’ve noticed in other laptops whose trackpads have integrated buttons. At least this is something that can be remedied with a software update. On the bright side, two-fingered scrolling generally works as promised — a pleasant surprise considering the grief multi-touch trackpads can cause when executed poorly. It’s not perfect, though: although pinch-to-zoom works reliably, you’ll have to concentrate a bit (and apply some pressure) to make text resize to the exact scale. Two-finger scroll also works flawlessly, we can slide two fingers up or down the touchpad to scroll through documents, websites, and more.

When it comes time to actually use the thing, when the AirBook isn’t just dead weight in your bag that you want as little of as possible, how does it actually perform? The AirBook brings 1.8GHz for Atom dual core processor with 4GB of RAM (our review unit, default comes with 2GB of RAM). So we put the machine through our rigorous test and you can dispute the numbers.

Now, as we all know benchmarks only tell a part of the story, but we’re happy to report that the numbers really do fall in line with our impressions here. PCMark Vantage clocked in at 1,399, 6-7 times lower than Apple’s MacBook Air 13-inch’s 9,484, and the AirBook’s 3DMark 06 score was considerably lower thanks to the limited graphics prowess here, just 178. So, it’s totally no gaming rig, but it is the sort of machine you wouldn’t think twice about trying to do some web-surfing on.

Speaking of battery life, we had a bad time with the AirBook. On our standard rundown test, where we’ll loop a video until the machine calls it quits, the AirBook clocked in at just 2 hours. What’s more, it offers a disappointing 1 hour and 26 minutes for web-surfing (Wi-Fi on).

Apple’s MacBook Air outperformed the AirBook significantly in our multimedia and multitasking test. In our daily usage, we noticed some occasional stuttery behavior while scrolling heavy webpages and galleries on the AirBook, and 720p/1080p video in YouTube did not play back smoothly (maybe we can blame that on Flash…). We tried to stream and watch 1080p H.264 video from Apple’s movie trailers site, but the machine just could not handle it.

Apple’s MacBook Air also performed much better in our photoshop processing test, and our iTunes coding test as well.

On the gaming front, we gave up the idea to test, since it’s an Atom-powered notebook with crappy GMA 3150 graphics. In standard usage, surfing and typing and Facebooking and such, you should be able to do much better.

The AirBook sports a 32GB KingSpec mini PCIe MLC solid-state drive. We wanted to know the max read speeds and top write speeds of the SSD, so, we used a disk benchmark utility called CrystalDiskMark to carry out the test. Simulating a 1GB transfer, our read / write rates peaked at those numbers in the picture above. The AirBook reached read speeds of about 93 MB/s and max write speeds of roughly 49 MB/s.

Speaking of boot time, the AirBook booted in 53 seconds, and we think that’s pretty slow for a SSD-powered laptop. It also resumes from sleep in about three seconds. However, the AirBook does not remain quiet.

For no reasons, the AirBook grew noisy when you are using it, and sometimes it will remain quiet. We asked the Huaqiangbei vendor about this issue, and we were told that the manufacturer is working on a fix. No explanations were made, and we were speechless. The fan sound is really irritating.

The AirBook looks impressive, and it’s probably the best-looking Windows laptop on the market. Now, the knockoff makers get close, but there’s still nothing on this planet that could truly match the design quality of Apple’s unibody MacBook Air. Apple’s Air’s blade design is still thinner, lighter in weight, and it’s just sturdy.

Both of these laptops are amazing-looking, but Apple is still a cut above of the knockoff. When the two machines are put side to side, we can see that the Chinese knockoff makers are facing difficulties replicating Apple’s unibody enclosure. Just look at this pic below,

Man, the AirBook’s lid is twice thicker than the lid of Apple’s MacBook Air.

The AirBook rings in at $499 with a 1.8GHz Atom D525 CPU with GMA 3150 graphics, 2GB of RAM and a 32GB SSD. The AirBook’s 1366 x 768 display is lower-res, and it lost out big on battery life. If you love the look and feel of Apple’s MacBook Air, but could not afford to get one, the AirBook could be your perfect love. But you can only do web-surfing on it, forget about video editing, HD videos playback, and gaming.

On the other hand, if you opt for Apple’s MacBook Air you’ll be getting a more precise trackpad, ultra-fast performance, and better display. And in terms of ports, the two are well-matched: while the Apple’s MacBook Air has a Thunderbolt port, the AirBook has mini-HDMI.

One more thing, both machines come with a MagSafe power adapter. Apple’s MagSafe adapter is smaller in size, and we think its cord is more durable.

The AirBook is a super-slim notebook that steals MacBook Air’s iconic look and feel. It looks 98% similar to the MacBook Air, however, the AirBook is plastic on the outside, metal on the inside. With its alu-plastic unibody, the AirBook is thicker, and weighs a bit heavier. Comparing with the MacBook Air, Apple surge ahead in terms of performance and it was just too hard to overcome for the knockoff makers. For Web surfing, e-mail, and working on office documents, which is 90 percent of what most people do on their laptops anyway, the AirBook performs adequately, as long as one’s expectations are kept modest.

The verdict? THE DESIGN IS JUST INCREDIBLY UNORIGINAL, and we recommend that you DO NOT BUY this knockoff since it violates Apple’s design and ILLEGALLY uses the Apple logo. You can still buy one for yourself, all we can say is only a person who has no culture will buy this thing.
Share this
Newer Post Older Post Home