High School Girl Smuggles 30 iPhone by Hiding Under her Dress 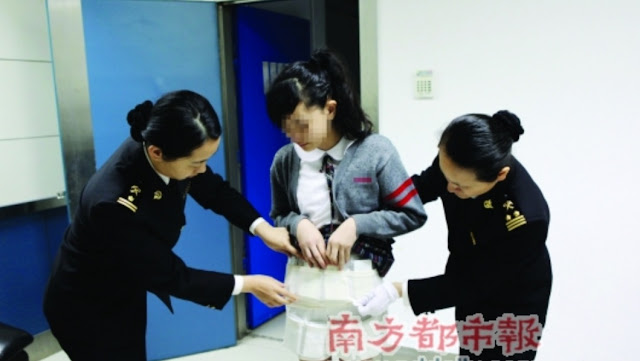 A Hong Kong 12 years-old high school girl had been caught for smuggling a total of 30 iPhones to Shenzhen China. The young girl looked like a regular student wearing school uniform but did not carry any school bag.
When she passed through the customs regulatory site, she was much nervous unlike other students. The official stopped her and after inspection, they found lots of iPhone tied secretly under her school dress. Surprisingly, her action was instigated by her mother.

In the end, the girl’s mother came to the scene and explained the situation. According to what she said, the smuggler had passed her the iPhones in Hong Kong, and she can earn HKD$20 per piece (about $2.57 USD) by bringing them to Shenzhen. She thought it would be easy to earn these money by asking her kids to handle the job, but her daughter just get caught.

Customs officials say they pay special attention to travelers who have several check-in records in one day. Sometimes, the officials are already familiar with these travelers, especially those that pass more than 10 times a day. Therefore, in order to avoid the inspection, smuggler often hire new faces to do their work. Usually what they do is to pay a small amount of money to high school students and even juveniles to smuggle the gadgets for them.

We just felt the schools have to improve some moral education to inform the young kids of the dangers of participating in such an act. And of course, the parent has the greatest responsibility on this.
Share this
Newer Post Older Post Home