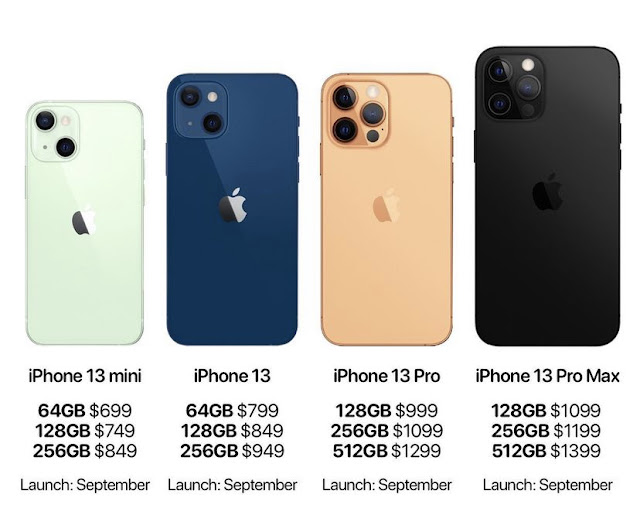 Here you can see iPhone 13 Retail Prices USA. Apple will show four models of the next generation of the iPhone 13 in a month. The upcoming event is accompanied by a lot of insiders, leaks about the characteristics and appearance.

Apple, as usual, will arrange a show in the third week of September. Last year's shift by two weeks, according to analysts of the investment company Wedbush, will not happen again.

Usually, the company from Cupertino holds conferences on Tuesdays, which this year falls on September 14. iPhone 13 Pre-order, again according to tradition, will be opened on the first Friday after the presentation, that is, on the 17th, and iPhone 13 sales will begin a week later — on the 24th.

The iPhone 13 Retail Prices of the main Apple product is traditionally not disclosed. But some information still leaked to the Network thanks to Chinese insiders associated with retail sales of electronics.


The new series of Apple mobile phones, despite the complete failure of the iPhone 12 mini model, will still consist of four models. The two flagship ones with the Pro prefix in the name will be joined by the usual iPhone 13 and its smaller version with the mini prefix.